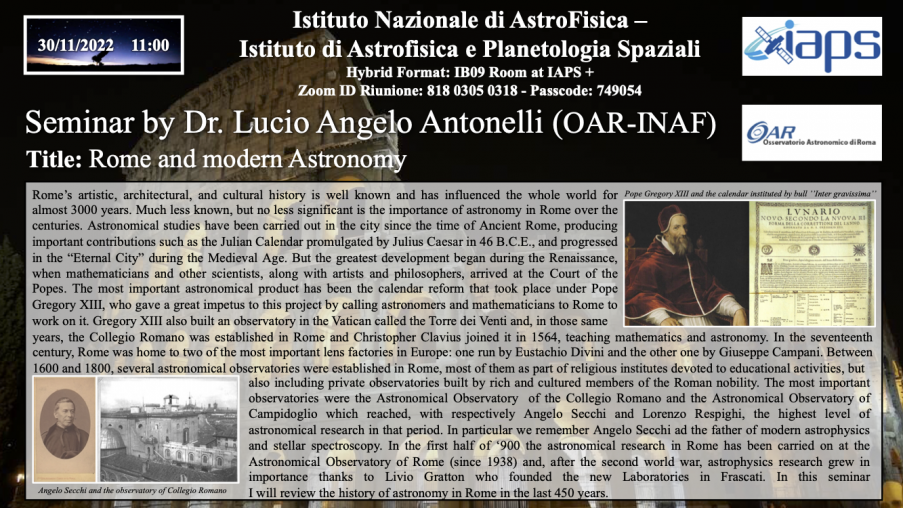 Rome’s artistic, architectural, and cultural history is well known and has influenced the whole world for almost 3000 years. Much less known but no less significant is the importance of astronomy in Rome over the centuries. Astronomical studies have been carried out in the city since the time of Ancient Rome, producing important contributions such as the Julian Calendar promulgated by Julius Caesar in 46 B.C.E. Astronomical studies were also carried out in the “Eternal City” during the Medieval Age. But the greatest development began during the Renaissance when mathematicians and other scientists, along with artists and philosophers, arrived at the Court of the Popes. The most important astronomical product has been the calendar reform that took place under Pope Gregory XIII, who gave a great impetus to this project by calling astronomers and mathematicians to Rome to work on it. Gregory XIII also built an observatory in the Vatican called the Torre dei Venti and, in those same years, the Collegio Romano was established in Rome and Christopher Clavius joined it in 1564, teaching mathematics and astronomy. In the seventeenth century, Rome was home to two of the most important lens factories in Europe: one run by Eustachio Divini and the other one by Giuseppe Campani. Between 1600 and 1800, several astronomical observatories were established in Rome, most of them as part of religious institutes devoted to educational activities but also including private observatories built by rich and cultured members of the Roman nobility. The most important observatories were the Astronomical Observatory of the Collegio Romano and the Astronomical Observatory of Campidoglio which reached, with respectively Angelo Secchi and Lorenzo Respighi, the highest level of astronomical research in that period. In particular we remember Angelo Secchi as the father of modern astrophysics and stellar spectroscopy. In the first half of ‘900 the astronomical research in Rome has been carried on at the Astronomical Observatory of Rome (since 1938) and, after the second world war, astrophysics research grew in importance thanks to Livio Gratton who founded the new Laboratories in Frascati. In this seminar I will review the history of astronomy in Rome in the last 450 years.