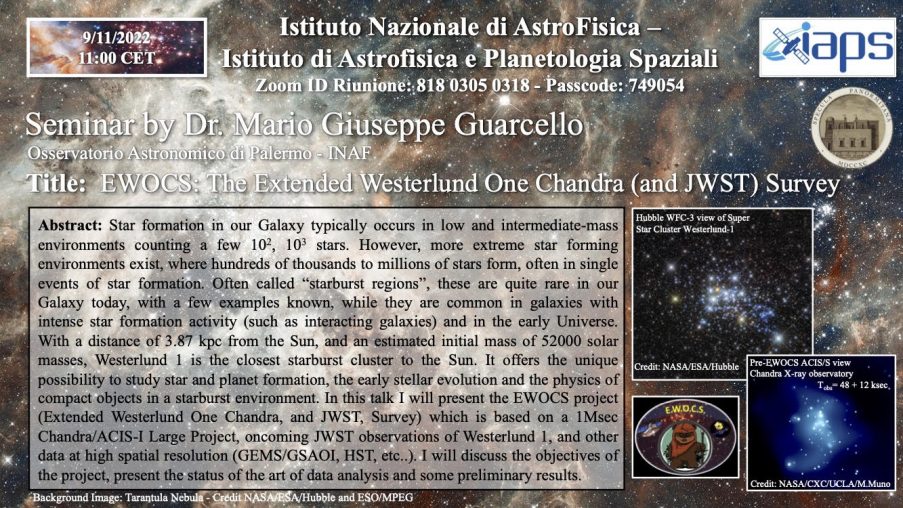 Star formation in our Galaxy typically occurs in low and intermediate-mass environments counting a few 102, 103 stars. However, a few more extreme star forming environments exist, where hundreds of thousands to millions of stars form in dense regions, often in single events of star formation. Often called “starburst regions”, they are quite rare in our Galaxy today, with a few examples known, while they are common in galaxies experiencing epochs of intense star formation activity (such as interacting galaxies) and in the early Universe. With a distance of 3.87 kpc from the Sun, and an estimated initial mass of 52000 solar masses, Westerlund 1 is the closest starburst cluster to the Sun. It offers the unique possibility to study star and planet formation, the early stellar evolution and the physics of compact objects in a starburst environment. In this talk I will present the EWOCS project (Extended Westerlund One Chandra, and JWST, Survey) which is based on a 1Msec Chandra/ACIS-I Large Project, oncoming JWST observations of Westerlund 1, and other data at high spatial resolution (GEMS/GSAOI, HST, etc..). I will discuss the objectives of the project, present the status of the art of data analysis and some preliminary results.