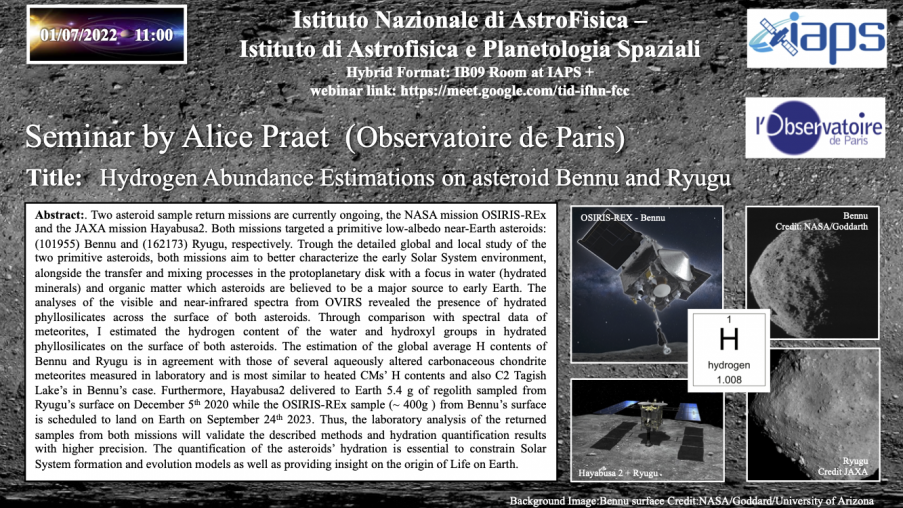 Title: Hydrogen Abundance Estimations on asteroid (101955) Bennu and (162713) Ryugu, targets of the OSIRIS-REX and Hayabusa2 missions

Abstract: Two asteroid sample return missions are currently ongoing, the NASA mission OSIRIS-REx (Origins, Spectral Interpretation, Resource Identification, and Security–Regolith Explorer) and the JAXA mission Hayabusa2. Both missions targeted a primitive low-albedo near-Earth asteroids: (101955) Bennu and (162173) Ryugu, respectively. Trough the detailed global and local study of the two primitive asteroids, both missions aim to better characterize the early Solar System environment, alongside the transfer and mixing processes in the protoplanetary disk with a focus in water (hydrated minerals) and organic matter which asteroids are believed to be a major source to early Earth. The analyses of the visible and near-infrared spectra from OVIRS (OSIRIS-REx Visible and InfraRed Spectrometer) as well as NIRS3 (Near-InfraRed Spectrometer) revealed the presence of hydrated phyllosilicates across the surface of both asteroids. Through comparison with spectral data of meteorites, I estimated the hydrogen content of the water and hydroxyl groups in hydrated phyllosilicates (i.e. H content) on the surface of both asteroids. The estimation of the global average H contents of Bennu and Ryugu is in agreement with those of several aqueously altered carbonaceous chondrite meteorites measured in laboratory and is most similar to heated CMs’ H contents and also C2 Tagish Lake’s in Bennu’s case. Furthermore, Hayabusa2 delivered to Earth 5.4 g of regolith sampled from Ryugu’s surface on December 5th 2020 (Japan time) while the OSIRIS-REx sample from Bennu’s surface (about 400g collected estimated) is scheduled to land on Earth on September 24th 2023. Thus, the laboratory analysis of the returned samples from both missions will validate the described methods and hydration quantification results with higher precision. The quantification of the asteroids’ hydration is essential to constrain Solar System formation and evolution models as well as providing insight on the origin of Life on Earth.