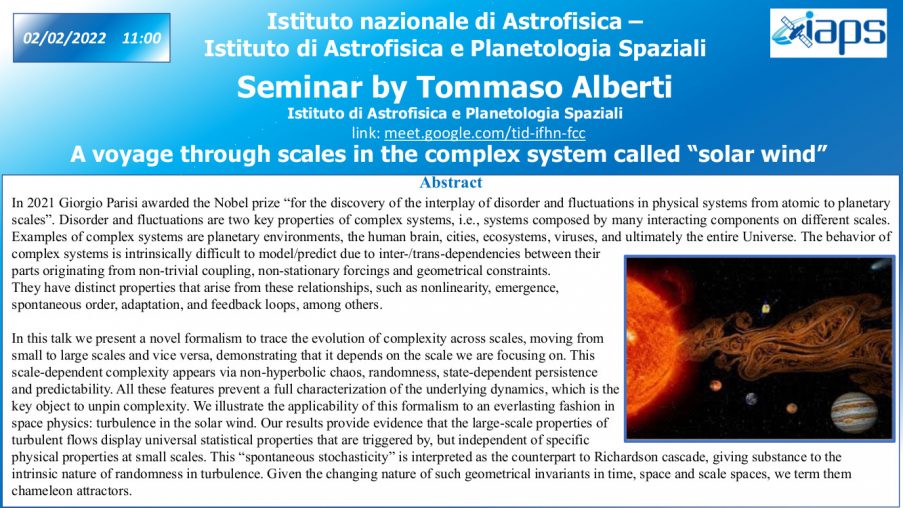 Abstract: In 2021 Giorgio Parisi awarded the Nobel prize “for the discovery of the interplay of disorder and fluctuations in physical systems from atomic to planetary scales”. Disorder and fluctuations are two key properties of complex systems, i.e., systems composed by many interacting components on different scales. Examples of complex systems are planetary environments, the human brain, cities, ecosystems, viruses, and ultimately the entire Universe. The behavior of complex systems is intrinsically difficult to model/predict due to inter-/trans-dependencies between their parts originating from non-trivial coupling, non-stationary forcings and geometrical constraints. They have distinct properties that arise from these relationships, such as nonlinearity, emergence, spontaneous order, adaptation, and feedback loops, among others.

In this talk we present a novel formalism to trace the evolution of complexity across scales, moving from small to large scales and vice versa, demonstrating that it depends on the scale we are focusing on. This scale-dependent complexity appears via non-hyperbolic chaos, randomness, state-dependent persistence and predictability. All these features prevent a full characterization of the underlying dynamics, which is the key object to unpin complexity. We illustrate the applicability of this formalism to an everlasting fashion in space physics: turbulence in the solar wind. Our results provide evidence that the large-scale properties of turbulent flows display universal statistical properties that are triggered by, but independent of specific physical properties at small scales. This “spontaneous stochasticity” is interpreted as the counterpart to Richardson cascade, giving substance to the intrinsic nature of randomness in turbulence. Given the changing nature of such geometrical invariants in time, space and scale spaces, we term them chameleon attractors.