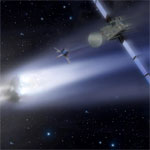 Rosetta spacecraft is the first to undertake the long-term exploration of a comet at close distance. It includes a large orbiter designed to operate for a decade at large distances from the Sun, and a small lander. Asteroids Steinz and Lutetia fly-by have been succesfully performed, in 2008 and 2010 respectively. The next step in Rosetta journey will be the Comet 67P/Churyumov-Gerasimenko rendezvous manoeuvres in May 2014.

IAPS contributed to the Rosetta mission developing the VIRTIS experiment, an imaging spectrometer that will map in detail the composition and temperature of the comet’s nucleus.