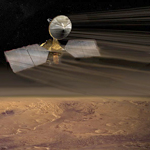 MRO is a multipurpose spacecraft designed to conduct reconnaissance and exploration of Mars from orbit. It was launched August 12, 2005, and attained Martian orbit on March 10, 2006 when it began its primary science phase.

IAPS contributed to MRO’s Shallow Subsurface Radar (SHARAD) experiment, designed to probe the internal structure of the Martian polar ice caps. It also gathers planet-wide information about underground layers of ice, rock and possibly liquid water that might be accessible from the surface. SHARAD uses HF radio waves to resolve layers as thin as 7 m to a maximum depth of 1 km.

SHARAD is designed to operate in conjunction with Mars Express’s MARSIS, which has lower resolution but penetrates to a much greater depth. Both SHARAD and MARSIS were made by the Italian Space Agency.