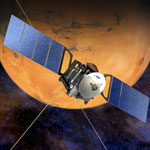 Mars Express is the first planetary mission attempted by ESA. The Orbiter has been successfully performing scientific measurements since Early 2004, namely, high-resolution imaging and mineralogical mapping of the surface, radar sounding of the subsurface structure down to the permafrost, precise determination of the atmospheric circulation and composition, and study of the interaction of the atmosphere with the interplanetary medium.

IAPS has contributed to this Mission with the Planetary Fourier Spectrometer (PFS)and is also involved in the Radar Mars Advanced Radar for Subsurface and Ionosphere Sounding (MARSIS).