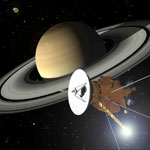 Cassini is international collaboration among NASA, ESA and ASI devoted to the study of the Saturn system with particular attention to its largest moon, Titan. The mission has been very succesfull and an extention has been recently approved.In particular, data of the mission allowed to study the system of Saturn in detail. Such data have allowed to identify the characteristics of the satellite surfaces, to study the complex atmosphere of Saturn and to make detailed investigation of Titan.

IAPS is in the Science team of Cassini, after having contributed to the payload development with the visible channel of VIMS (Visual and Infrared Mapping spectrometer).