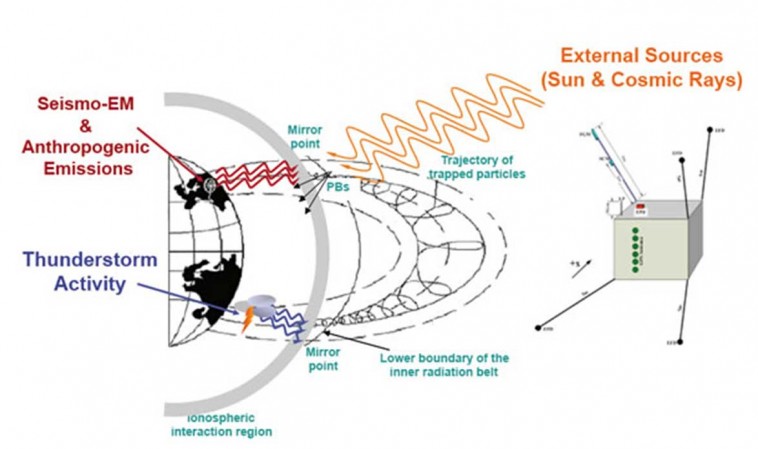 CSES is a mission of China National Space Administration and the Italian Space Agency. The satellite, 3-axis attitude stabilized, is based on the Chinese CAST2000 platform. It is placed at a 98° Sun-synchronous circular orbit at an altitude of 500 km, since February 2018 and has an expected lifetime of 5 years. The main objective of the mission is the monitoring of perturbations in the ionosphere, and magnetosphere and the Van Allen belts due to electromagnetic phenomena of natural and anthropogenic origin, and to study their correlations with seismic events. Furthermore, CSES mission allows the study of the physical properties of the ionospheric plasma at the satellite altitude, and to characterize the ionosphere in quiet and disturbed conditions. Cosmic and solar physics studies, namely Coronal Mass Ejections (CMEs), solar flares, solar energetic particles (SEPs), cosmic ray modulation, X-rays variation are other relevant topics that can be covered by the mission as well. Italy participates with several universities and research institutes. INFN and INAF are directly involved in instrumental development and test respectively. The High-Energy Particle Detector (HEPD), developed by the INFN and several Italian universities, detects high energy electrons, protons and light nuclei. Its main objective is to measure the increase of the electron and proton flux due to short-time perturbations of Earth’s environment caused by cosmic, solar, and terrestrial phenomena. The energy range explored is 5-100 MeV for electrons and 15-300 MeV for protons. Four Electric Field Detectors (EFD) have been specifically designed to allow the monitoring of electromagnetic fields (from DC to 3.5 MHz) for the study of ionospheric disturbances possibly related to seismic activity and earthquake preparation mechanisms. In particular, the mission aims at analysing the temporal correlation between seismic events and the occurrence of electromagnetic perturbations. The environmental plasma parameters, including ion density, ion temperature, ion drift velocity, ion composition and ion density fluctuation, are monitored by the CSES Plasma Analyser (PA) and by two Langmuir probes (Lp) developed by CSSAR-CAS. The EFDs have been designed in collaboration between the Lanzhou Institute of Physics and the Italian INFN (Rome-Tor Vergata section) and IAPS-INAF Institute in Rome. Two versions of EFD with different electronics have been developed by Chinese and Italian teams and their functionalities compared one each other and tested at the Plasma Chamber at IAPS-INAF as well as the Plasma Analyzer and Langmuir probes, in order to check their sensitivity in detecting the ionospheric plasma parameters.

IAPS gives an important contribution to the mission profile. In particular, to provide and arrange the Plasma Chamber Facility to perform Functional Tests and Calibrations on several Chinese payloads of CSES satellite: Langmuir Probe (LP), Retarding Potential Analyser (RPA), Ion Capture Meter (ICM), Ion Drift Meter (IDM), Electric Field Detector (EFD).  A specific experimental activity was dedicated to test an EFD Prototype designed by INFN Sect. Rome “Tor Vergata”. INAF-IAPS has collaborated to the design of this sensor which has been used for comparative tests vs the Chinese EFD payload. INAF-IAPS is a leading Institute for the CSES Science definition and flight Data Analysis and Interpretation of the Mission Results. The main task of these activities are:
– Study of magnetosphere/ionosphere coupling processes on fields and plasma parameters.
– Analysis of ionospheric turbulence and plasma parameter day/night asymmetry along CSES orbit.
– Study of variability on CSES plasma environment and ionospheric fields caused by Solar energetic particles.
– Implementation of a database of space observables to evaluate the external forcing perturbations on the ionospheric environment at CSES altitude.
– Development of a web interface for database sharing among science teams.
– Plasma Chamber tests on payloads to clarify ambiguous response shown by data analysis.