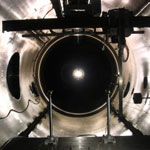 Responsible; Dr. Piero Diego Research staff; Dr. Elisabetta De Angelis/ Dr. Igor Bertello Former responsible and science consultant; Dr. Giuliano Vannaroni Technological staff; Mr. Nello Vertolli Mechanical shop staff; Mr. Alfredo Morbidini 1. General features The plasma chamber developed at INAF/IAPS is an experimental apparatus capable to reproduce a large volume ionospheric environment, which is particularly suitable to perform studies on a variety of plasma physics subjects that can be summarizes as follows: 1- functional tests of experiments envisaged to operate in a ionospheric environment (sensors exposed to space plasma); 2- characterization and compatibility tests of components for space applications (materials, satellite paints, photo-voltaic cells, etc.); 3- calibration of plasma diagnostic sensors; 4- basic plasma physics experiments (interaction of charged bodies with plasma, two plasma interaction processes, propulsion and power generation in space through electrodynamic tethers); 5- tests on active experiments which use cathodes and/or plasma sources (ion thruster, ion beam neutralizers, hollow cathodes, field effect emitters, plasma contactors). The facility consists of a large volume vacuum chamber (a cylinder of length 4.5 m and diameter 1.7 m) equipped with a plasma source of Kaufman type. This source produces an Argon plasma with parameters (i.e. electron density and temperature) very close to the values encountered in the daytime ionosphere at F layer altitudes. A variation of plasma density in the experimental region downstream the source, could be obtained by varying the source current discharge and neutral gas flow rate. Table 1 shows the plasma parameters expected in the ionosphere at various altitudes and their comparison to the values obtained in the chamber for a typical plasma source operation. Figure 1 shows photograph of the facility at INAF/IAPS laboratory. Ionosphere Plasma chamber h (km) p (mbar) N (m-3) Te (K) p (mbar) N (m-3 ) Te (K) 100 2.710-4 11011 300 710-6 51011 – 51012 1000 – 4000 150 8.010-6 31011 1000 200 1.210-6 41011 2000 400 4.010-8 11012 3000 4.5 m 1.7 m Fig. 1 – View of plasma chamber facility at INAF/IAPS laboratory. The plasma generated by the source is accelerated into the chamber at a velocity that can be tuned to simulate the relative motion between an object orbiting in space and the ionosphere ( 8 km/s). This feature, in particular, allows laboratory simulations of compression and depletion phenomena typical of the ram and wake regions around ionospheric satellites (e.g. ISS). Figure 2 represents the schematics of the plasma source used in the facility. Plasma beam Fig. 2 – Schematics of the Kaufman plasma source used in the facility. In addition, the apparatus is equipped with a two-axis magnetic coil system capable to control the ambient magnetic field. The field vector components within the chamber can be independently controlled along axial and vertical directions. In this way, the plasma beam and the magnetic field pattern can be set to reproduce the conditions encountered by satellites in both equatorial and polar orbits. The magnitude of the field can be varied between 0 and 10-4 T. In particular, experiments in absence of the field can be performed by annulling the Earth’s magnetic field. In fact the terrestrial field can be compensated down to a residual value of 2.510-6 T in a volume of about 1 m 3 located close to the coil center. Such a residual field is sufficient to consider the plasma non magnetized, being the electron gyroradius (with Te  2000 K) of the same order of the chamber dimensions (i.e. the electron motion is not dominated by the field but rather by collisions with the chamber wall). 1.76 1.76 13 turns 6 Dimensions are indicated in meters Plasma beam Plasma source 10 turns 13 turns Fig. 3 – Sketch of magnetic coil system The chamber vacuum system is operated through a cryo-pump with a pumping speed of about 7000 l/s with Argon. This feature allows a minimum pressure (in absence of plasma) of about 510-7 mbar. With working plasma source, the neutral pressure is a function of the operating gas flow rate. In the typical conditions (Argon flow rate 1 sccm) we obtain neutral pressures of about 710-6 mbar which is sufficient to maintain particle mean free path larger than the chamber length and implying the conditions of a collisionless plasma. 1.1 Plasma diagnostic The plasma diagnostic used in the plasma chamber is based on Langmuir Probes (LP) and Retarding Potential Analyzer (RPA). LPs allow to determine the electron temperature, plasma potential, ion and electron densities. They consist of spherical electrodes (4 mm diameters) dynamically biased with respect to the local plasma potential. The voltage swept is tailored on the basis of the expected plasma parameters and is usually set within +/-10 V (however the system allows a maximum value of +/- 100 V). The current collected by the probe is measured with a high resolution electrometer and data of the resultant current-voltage characteristic are analyzed in real time and also stored for possible offline analysis. Up to 10 different probes can be independently operated during the experiments (data are collected by a fully automated system – based on NI PXI under Labview s/w)